SAGRA DEL TORDO: The Sagra That Has Outgrown Its Name 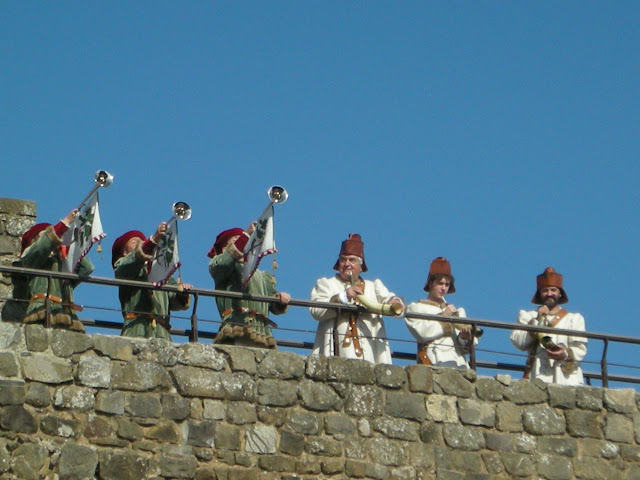 Over 50 years ago, the city of Montalcino started the Sagra del Tordo in an effort to boost the local economy. Since then the little Sagra with big hopes has outgrown its own name.

Sagra, yes.
The last weekend in October still offers the best in local dishes and vino, but it goes beyond that. You might call it a folkfest with parades in medieval costumes, traditional folk dancing and an exciting archery tournament between the quarters of Montalcino.

Tordi, no.
Thrush have become a protected species so they are no longer on the menu (much to local dismay).

TOP TEN REASONS WHY YOU SHOULD COME TO THE SAGRA DEL TORDO
(in no particular order. Well, not really.)

10. The excitement and rivalry in the air. During the settimana santa, the week leading up to the big festival, you can feel a buzz around town. Banners are hung on the old City Hall, flags are unfurled in the four quarters and people are genuinely happy spending all week together sharing meals, singing songs, and, believe it or not, working. Not in a Snow-White-and-the-Seven-Dwarfs kind of way, but something with more of a medieval spin on it.

9. Montalcino. While you are soaking up all this fizzy atmosphere, you can enjoy the stunning views from the Fortress onto the Val d’Orcia and the charming streets of this Tuscan town. Make sure you bring your camera!

8. The Quarters. Montalcino is divided into four quarters. On your stroll around town, you will see the symbols on the house numbers for Borghetto (red and white), Ruga (blue and yellow), Travaglio (red and yellow) and Pianello (white and blue). See map here.

During this week, the borders between the four quarters are distinctly marked by the flags, the intense rivalry ignites once again and there is no cross-quarter socializing… at least during dinner time. Sometimes the main square becomes a stage for a sort of sing-off late at night as clusters of quartieranti chant their fighting anthems from their designated corners, and then everyone has a drink together afterwards.
On a personal note, I have lived here for about ten years and freely floated from one quarter to another with my friends for whatever occasion. I cheered for the archers that I knew and was usually happy for the winning quarter. I felt a bit like Switzerland (sorry, Katja!), and thoroughly enjoyed my neutrality… until I started getting more and more involved in one quarter in recent years and have been an official card-carrying member since January. Let’s go, Pianello! 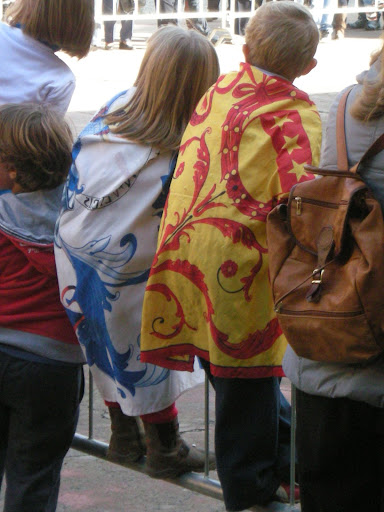 7. Dancing in the Streets. Thanks to a group of young Ilcinesi, you can still see the traditional Trescone folk dance on the streets of Montalcino. Clap along as they dance on Saturday morning at 11 am in the main square, Piazza del Popolo, and on Sunday morning at 9 am around town.

6. The Draw. On Saturday morning at 12 pm everyone gathers in the main square. Each quarter arrives one at a time led by their drummer, flag bearer, captain of the archers and two archers in costume followed by the quartieranti proudly singing and wearing their colors. Each captain brings the names of three previously selected best archers from the quarter to be drawn in public. There is a moment when all four quarters are drumming and singing and you can feel the vibration right in your chest: the true essence of the Sagra. Then absolute silence reigns over the square as the archers for each quarter are randomly selected. Silence, then an outbreak of joy… and more singing.

5. Food. What is a Sagra without delicious food? After the draw, make your way to the garden near the Fortress where each quarter sets up a stand on Saturday from 12.30 pm to 8 pm and on Sunday from 9 am to 8 pm. Smoke from the grill wafts through the air as ribs, sausages and even porcini sizzle their way to perfection. Perhaps lampredotto tickles your fancy (who knew cow stomach could be so darn good?). Or try the handmade pinci or gnocchi or pappardelle with wild hare sauce. The mouth-watering selection is endless. Three of the quarters also welcome sagra-goers in their halls for a set menu. For further information and the menus, click here.

3. Good company. What a great way to spend a Saturday or Sunday afternoon… eating lunch in good company outside the Fortress while the grills are grilling, chestnuts are roasting, children are running around drumming on their toy drums and someone is usually singing and raising a glass of red. 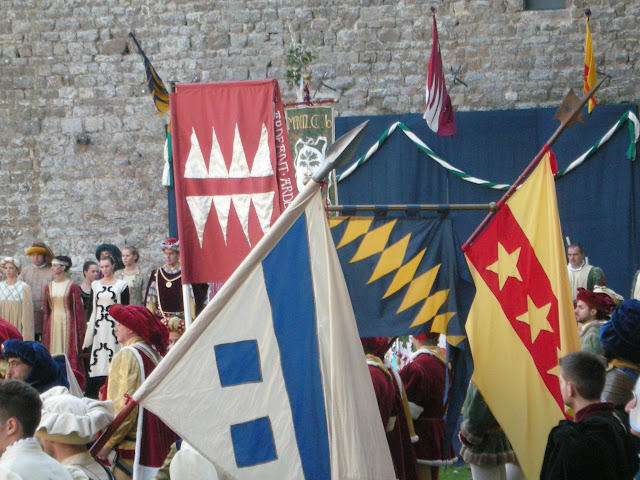 1. Archery. This is a real archery competition. Sometimes victory comes with a bit of luck, but there is no trickery here. The best archers win. For the children of the quarter, archers are true heroes who spend the year practicing for this event. Everyone hopes for victory; the glory of winning on the field. When the winner is officially declared, the celebrations begin and there is more singing and parading around town with the coveted silver arrow as the autumn sun sets on Montalcino. 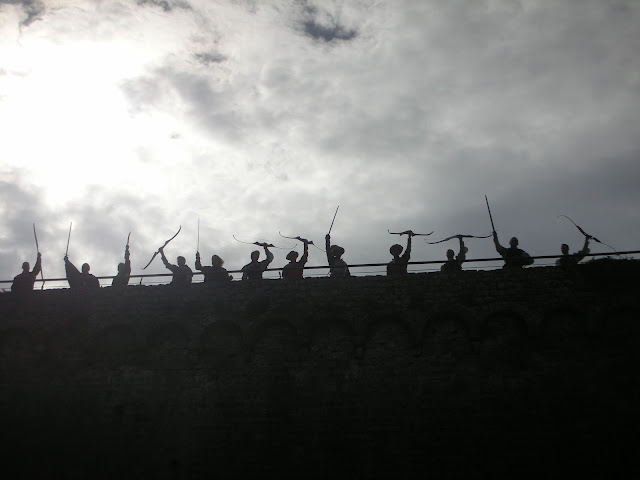 SAGRA DEL TORDO 2012 in MONTALCINO, Saturday and Sunday October 27/28
Surprisingly, after an October with incredibly hot temperatures, the weather forecast for the 2012 edition of the Sagra is looking rather miserable. With bad weather, be sure to check the Sagra del Tordo website or call Montalcino's tourist office to find out whether the event is going to be postponed: +39 0577 849 331.

Lisa Maria Annicchiarico, is an Italo-Canadian English teacher, translator and writer who has chosen Montalcino as her Italian base. If you plan a trip to Brunello town, make sure you check out her tips for a day in Montalcino, written for the Florentine, the English language newspaper from Florence. She also wrote PINK, a wonderful children's book with a message, which so deserves a great publisher. Know of anybody? Get in touch with her here via Facebook.